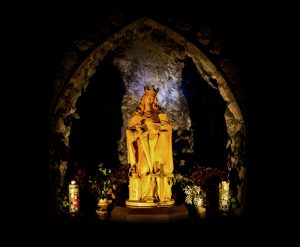 Barbara was the daughter of a pagan king in Asia Minor at the time of the persecution of Christians. Her royal father Dioskuros locked her in a tower because of her beauty. A hermit brought Barbara to Christianity. Her father tried in vain to dissuade her from Christianity and condemned her to death for this reason. But she managed to escape from her prison and fled to the mountains where, in a miraculous way, a rock opened up and welcomed the saint protectively. This later became a symbol of the miners’ living space and workplace. Barbara was betrayed by shepherds and returned to her father. Her father had her scourged and tortured with torches until she was finally headed by her father.

Because of the current Covid situation, the traditional celebration of Barbara on December 4th, St. Barbara’s Day, on our tunnel construction sites will unfortunately have to be cancelled this year. Nevertheless, we wish all those working in mining and tunnelling a continued accident-free working time under the protection of St. Barbara!