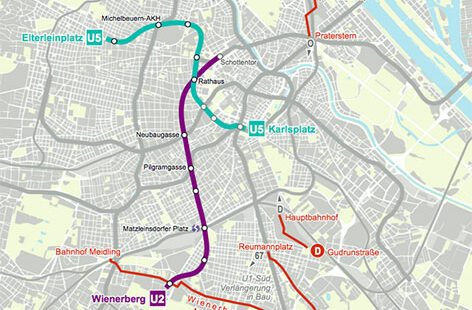 Vienna's underground network is being expanded - Geodata is part of it

The U2 is getting a new section to the south. Starting at the Rathaus (town hall), a total of 6 new stations and 3 track change facilities with emergency exits are being built on 6 kilometres of track. After completion of the works, they will make the U2 the longest underground line in Vienna. The U5 will take over the existing U2 platforms of the stations Karlsplatz, Museumsquartier, Volkstheater and Rathaus and will be extended to the new station Frankhplatz in the university district. The U5 will not only close a gap in the network plan, Vienna will also get its first fully automatic underground line. The U5 stations will all be equipped with platform screen doors. The reconstruction of the Rathaus station and the new stations will be carried out from shafts according to the NATM. The track tubes in the densely built-up area will be excavated for the U5 according to the NATM, for the U2 with TBMs.